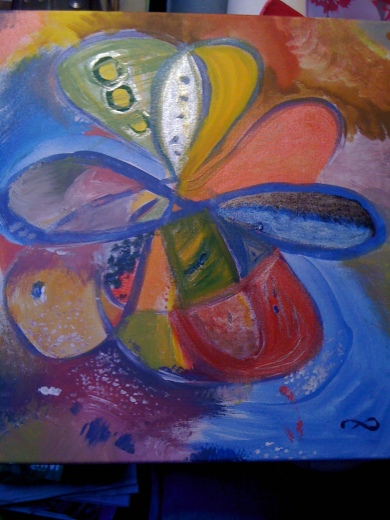 This is a painting a group of friends worked on with me to commemorate a birthday of mine.  I sketched out the idea, and everyone filled in the loops. It’s called: “Infinity Loops”.  Each loop is a moment in time and space, infinitely connected.

Lately I have been aware that  space and time are two filters that we view God through.  God exists, we exist, everyone, everything ever created exists…. but we see them through these lenses of space and time.

I had a dream not that long ago, where my husband, Brice, and I were both preparing the same house for habitation.  It was a cute Norwegian cabin with a bright yellow part and another part, bright clear red.  The thing of this dream was that we were there [together] but in different dimensions.  We saw each other, we moved in unison with purpose, but then he slipped his dimension one way, and I the other way…  If you were watching from a third view point, it would be like two films slipping in different directions, yet still, working on the same house.

Space and time, the framework within we live…Is there a way to view them as spiritual?  THAT’S a new question.

If the spiritual source from which we spring, is springing out dimensionally and in a particular time, is there any reason to exclude that from the spiritual totality of the world as spirit?

Are these two, space and time, more fluid and malleable than we know? Certainly they are in some of our experiences. For example, I remember in childbirth, at home, how the corners of the room receded far from me and space stretched to give me the space I needed to focus on the arrival of my son.  Time shifts all the time, depending on how much fun we’re having, how much concentration we give something, what we focus on.  One time a day long trip to Washington DC with my mother happened so quickly that there was no way physically we could have traveled that far, that fast.  Believe me, I stay pretty close to the posted speed limit.  But that trip, we didn’t care about time — and it wasn’t a limiting factor on our day together.

I have been taught the spiritual interpretation of the bible from a child, but I also genuinely believe each and every ‘miracle’ experience recorded there.  Why?  Because I have EXPERIENCED similar miracles, in some small degree.  If mine are true, and note worthy, surely those of the great mystics and the savior, are certainly experiences worth note in their reality.  The seas did part.  The lessons they teach are even more note worthy.

The bible shows many experience where space and time shift to meet the immediate need.  Not only that, but all the forces of nature shift.  Gravity?  A sure thing? Sure.  Until you’ve dropped an axhead which belongs to another in a pond.  Along comes a ‘man-oh-god’ with the right consciousness of God’s ever present help, and UP pops the axhead.

6 The company of the prophets said to Elisha, “Look, the place where we meet with you is too small for us. 2 Let us go to the Jordan, where each of us can get a pole; and let us build a place there for us to meet.”

3 Then one of them said, “Won’t you please come with your servants?”

“I will,” Elisha replied. 4 And he went with them.

They went to the Jordan and began to cut down trees. 5 As one of them was cutting down a tree, the iron axhead fell into the water. “Oh no, my lord!” he cried out. “It was borrowed!”

6 The man of God asked, “Where did it fall?” When he showed him the place, Elisha cut a stick and threw it there, and made the iron float. 7 “Lift it out,” he said. Then the man reached out his hand and took it.

Isaiah spoke to the Lord and the Lord brought the shadow ten degrees BACKWARD! Ten degrees is 40 minutes.

Modern quantum theory starts to understand the communication between particles vastly separated from each other by distance moving through time..http://http://www.dailygalaxy.com/my_weblog/2007/06/weird_science_c.html

Then distance dissolved many times, for example when Christ Jesus was INSTANTLY at the shore on one of his trip across the shore.   He also overcame mass and gravity by walking on water.  Christ overcame disease too.  He embraced the lepers by knowing something above and beyond the belief in leprosy.

Mass, matter, time, space, all the usual suspects in defining our experience are more open to interpretation than we allow.

Mary Baker Eddy, the discoverer of a different kind of science, Christian Science, shared that idea.  She wrote:

Jesus beheld in Science the perfect man, who appeared to him where sinning mortal man appears to mortals. In this perfect man the Saviour saw God’s own likeness, and this correct view of man healed the sick. Thus Jesus taught that the kingdom of God is intact, universal, and that man is pure and holy. Science and Health with Key to the Scriptures [pg. 477]

I think as we unloose ourselves from the boundaries of time and space, and matter and mass, we will see new horizons.  They have a role to play, but not a limitation ultimately.  Explore God and these will be less limitation, more framework.

4 thoughts on “Space and Time”

What do you think? Cancel reply