I watched a live production of The Passion the other day…filmed in New Orleans, it was a very contemporary version of the classic story of the days leading up to Christ Jesus’ resurrection.  I recommend you click on the link so you can watch it. It was an exciting event, the performance so emotional….And, while it captures the biblical story (and makes it modern-day approachable), it misses the point.—

Don’t stop there!  Don’t stop with the last supper, or with C.J. up on a cross– hung on a wall. Jesus was all about the resurrection experience…all about YOU, being your spiritual self, NOW.  Easter is really all about the morning meal on the shore with his disciples after his resurrection.

A friend, Steve O., brought this poem ‘The Morning Meal’  into our last Wednesday Testimony meeting here at our little Christian Science Society in Charlevoix, MI.  During the winter months, we are a small group that gathers around a round table…having an upper-room experience, if you know what I mean.  I’m so glad he shared it as we head into our Easter celebrations.

I think you will enjoy it. I like the calm measured way the poem unfolds.  Don’t hurry through it, read it out loud to yourself.  With every sunrise, think of this morning meal… 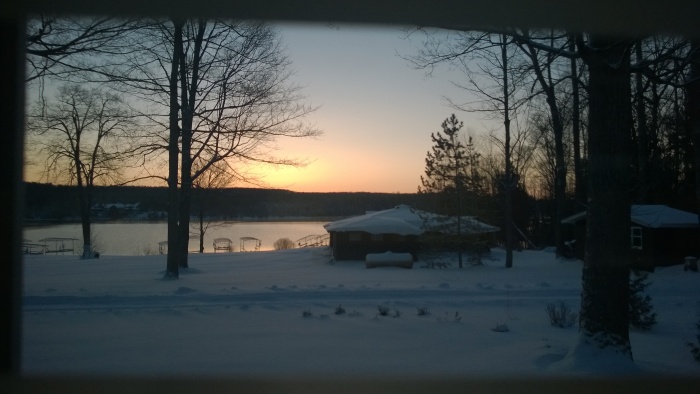 Jesus Appears at the Sea of Galilee

1After these things Jesus shewed himself again to the disciples at the sea of Tiberias; and on this wise shewed he himself. 2There were together Simon Peter, and Thomas called Didymus, and Nathanael of Cana in Galilee, and the sons of Zebedee, and two other of his disciples. 3Simon Peter saith unto them, I go a fishing. They say unto him, We also go with thee. They went forth, and entered into a ship immediately; and that night they caught nothing.

4But when the morning was now come, Jesus stood on the shore: but the disciples knew not that it was Jesus. 5Then Jesus saith unto them, Children, have ye any meat? They answered him, No. 6And he said unto them, Cast the net on the right side of the ship, and ye shall find. They cast therefore, and now they were not able to draw it for the multitude of fishes. 7Therefore that disciple whom Jesus loved saith unto Peter, It is the Lord. Now when Simon Peter heard that it was the Lord, he girt his fisher’s coat unto him, (for he was naked,) and did cast himself into the sea. 8And the other disciples came in a little ship; (for they were not far from land, but as it were two hundred cubits,) dragging the net with fishes.

9As soon then as they were come to land, they saw a fire of coals there, and fish laid thereon, and bread.10Jesus saith unto them, Bring of the fish which ye have now caught. 11Simon Peter went up, and drew the net to land full of great fishes, an hundred and fifty and three: and for all there were so many, yet was not the net broken.

12Jesus saith unto them, Come and dine. And none of the disciples durst ask him, Who art thou? knowing that it was the Lord. 13Jesus then cometh, and taketh bread, and giveth them, and fish likewise. 14This is now the third time that Jesus shewed himself to his disciples, after that he was risen from the dead.

And, because I love Hafiz so very much, here’s a sweet, simple one of his poems too:

“To those leaning on the sustaining infinite, today is big with blessings.”

‘Blessings and joy for you this Easter, and always–

One thought on “Don’t Stop There!”

What do you think? Cancel reply